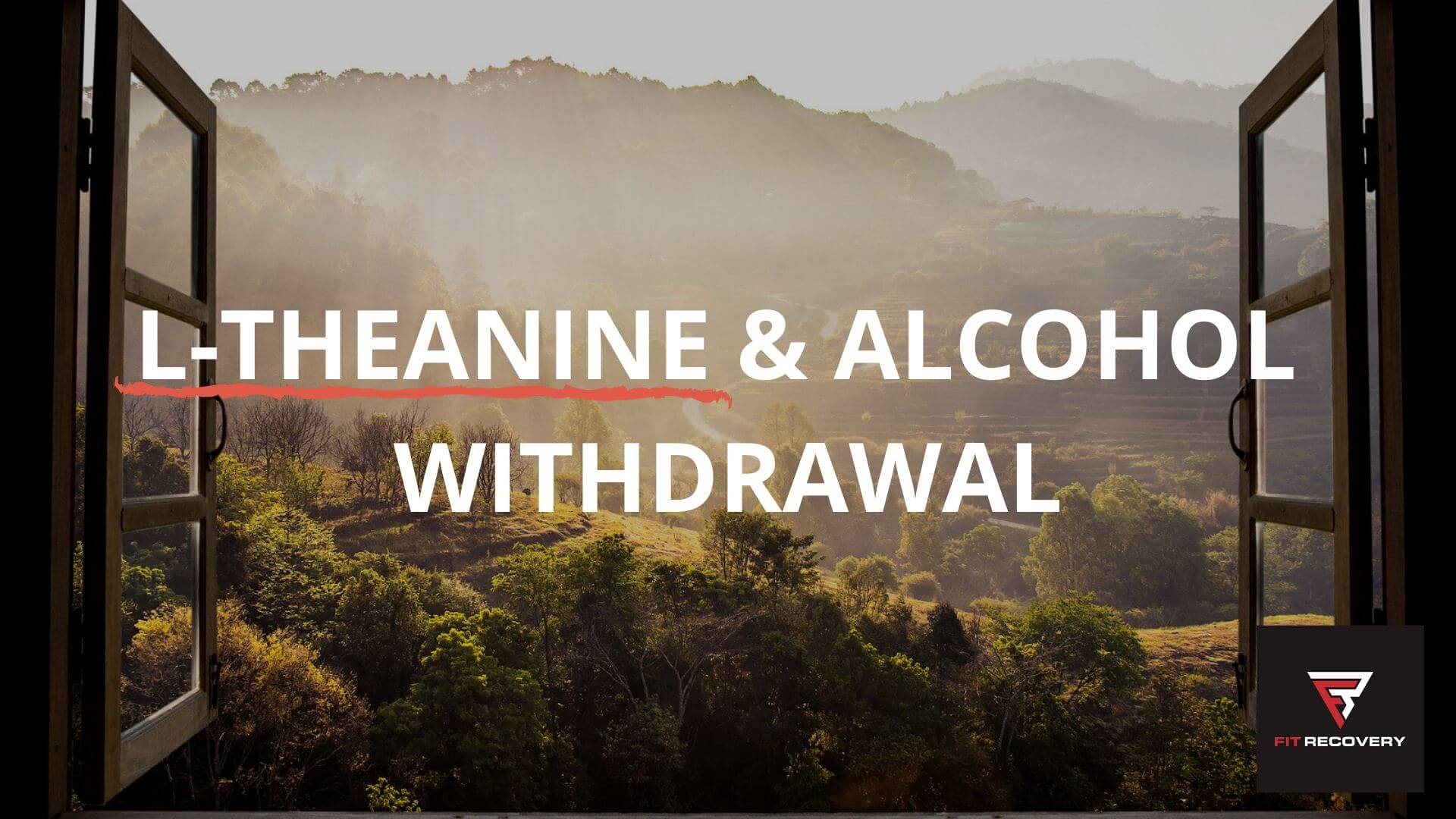 In this article, you’re going to learn about L-theanine and alcohol withdrawal. Not all supplements for alcohol recovery produce immediate effects, but L-theanine stands out for its ability to induce immediate relaxation. Months after I quit drinking, I discovered that L-theanine helped to end my post-acute withdrawal symptoms, including:

As soon as I quit drinking, I began taking a multivitamin, extra B-vitamins, and fish oil. While these basic nutrients helped, I did not feel totally stable until I discovered amino acids like L-theanine, L-glutamine, and DLPA.

After reading this article, you will have a clear understanding of the benefits of using L-theanine for alcohol withdrawal (including post-acute withdrawal). You will also know where to obtain the highest quality L-theanine supplements and what dosage is considered safe and effective.

L-theanine is an amino acid primarily known for its relaxing effects. It is contained naturally in green tea, helping to balance out the stimulating and jittery effects of caffeine. Over the past decade, L-theanine supplements have become popular among people interested in natural health and nootropics.

L-theanine reduces levels of cortisol, which is a stress hormone, and has been found to reduce abrupt blood pressure spikes in people who are experiencing stress.

As a dietary supplement, L-theanine can help to relieve the following issues:

L-theanine is similar in structure to a stress chemical in the brain called glutamate. Glutamate causes increased electrical activity in the brain, a state which anyone who has experienced alcohol withdrawal can relate to. When L-theanine plugs into glutamate receptors, it prevents glutamate from binding to these receptors and causing panic and jitters.

L-theanine may have a long-term protective benefit for brain cells, since many neurodegenerative conditions have been linked to excitotoxicity caused by high glutamate levels. (source) L-theanine is an analogue of another amino acid known as L-glutamine, and can also serve as a building block for natural GABA production. Ingesting L-theanine increases the brain’s natural supply of GABA. Since GABA and glutamate balance each other out in the brain, more GABA activity results in less glutamate activity.

Scientific research indicates that L-theanine also boosts levels of other important chemicals in the brain: As mentioned above, many people enjoy L-theanine simply by drinking green tea. However, the beneficial effects of L-theanine are more pronounced when this natural compound is isolated from caffeine and taken in supplement form. L-theanine exerts subtle effects on a range of neurotransmitters, but its most noticeable effect is relaxation. This is the case because it acts most powerfully on the brain’s GABA and glutamate system. In this section, we will review the importance of GABA and glutamate for the person who has recently quit drinking and is experiencing alcohol withdrawal.

GABA (gamma-aminobutyric acid) is an inhibitory neurotransmitter that dampens activity in the brain and causes a sensation of relaxation. GABA is perhaps the most important neurotransmitter involved in alcohol addiction, and also intuitively the easiest one to understand.

Most drinkers subjectively understand the experience of alcohol influencing their GABA receptors. Up to a certain point, the outside world seems to slow down to a manageable pace. People who drink to relax are essentially drinking to activate their GABA receptors.

Many people start drinking excessively because of an inherent deficiency in GABA production. Once dependence on alcohol occurs, natural GABA production is guaranteed to decline – even after a person stops drinking!

This is the case because the brain compensates for the repeated presence of alcohol by decreasing natural GABA production.

While alcohol impersonates GABA, it indirectly releases endorphins, dopamine, serotonin, and several other “feel good” neurotransmitters. All of these effects blend into the state of mind that we know as alcohol intoxication.

During alcohol withdrawal, GABA levels plunge (along with levels of these other feel-good chemicals). This is the natural result of having adapted to the presence of alcohol by turning the dial down on natural GABA production.

Now you understand why L-theanine is uniquely suitable for helping to soothe alcohol withdrawal symptoms like anxiety and insomnia. In the proper dosage (more on this below), it can provide instant relief from these symptoms – and it is gentle enough to be consumed daily for extended periods of time.

With all of this said, L-theanine is not potent enough to mitigate severe cases of alcohol withdrawal. If you are experiencing hallucinations or seizures, your best bet is to get professional care immediately. Doctors will likely prescribe a powerful benzodiazepine such as Ativan. After detox, amino acids can be very helpful to prevent post-acute withdrawal symptoms.

My Experience with L-Theanine

I did not discover L-theanine until months after I’d quit drinking. Because I had a very severe case of alcohol addiction, I was admitted to detox and given a tapered dose of benzodiazepines for nearly two weeks.

It took me months of research to identify natural compounds such as L-theanine for alcohol withdrawal. While I was done with the acute phase of alcohol withdrawal, I had post-acute withdrawal symptoms – including intermittent bouts of anxiety and insomnia – for many months after I quit drinking.

I recall that when I first began taking L-theanine, my nightly routine consisted of chamomile tea. I noticed that the addition of 50-100mg of L-theanine really helped me to relax and cut down on the amount of time I needed to fall asleep.

I continued taking L-theanine for about 3 months to help me wind down in the evenings. At the time, I had not even studied the basic biochemistry that we have covered in this article. I simply knew that I felt better – more relaxed, more positive – when I took L-theanine in the evenings.

Over time, I added additional supplements to my regimen, keeping what worked for me and discarding what did not work. This process of trial and error led to many epiphanies and a steadily increasing sense of well-being. Eventually, I achieved mental stability and even stopped missing alcohol.

Looking back, it’s frustrating for me to think about how long it took me to discover natural remedies for post-acute withdrawal. The good news is that you don’t have to wait as long as I did to fix your alcohol-induced neurotransmitter imbalances and move on with your life!

Scientific research supports the use of L-theanine for alcohol withdrawal:

If you have recently quit drinking alcohol, 50-200 mg per day of a high quality L-theanine supplement can help to alleviate the anxiety and insomnia that often accompany protracted (post-acute) alcohol withdrawal.

People who begin supplementing with L-theanine usually begin to feel noticeably better. Depending on the severity of the alcohol problem or gut damage that inhibits absorption, it may take a few weeks before feeling any positive effects from L-theanine supplementation.

When I finally learned about L-theanine for alcohol withdrawal, I took 100mg Suntheanine chewable tablets. This brand works very well, but I always had to brush my teeth afterwards because the chewables got stuck in my back molars.

If I had to do it all over again, I would simply take Calm Support, which contains 80mg per serving and, if taken as directed, 160mg per day.

This dosage will be effective for the vast majority of people who are experiencing mild to moderate anxiety or insomnia due to alcohol withdrawal.

I hope that you’ve enjoyed this article about the use of L-theanine for alcohol withdrawal. I will continue to be on the lookout for new supplements that hold promise for enhancing alcohol recovery.

My drinking days are long gone. I live an exciting lifestyle that revolves in large part around optimizing my body and brain. There is a definite learning curve here, and I know that trial and error with supplementation can be frustrating.

If you’ve recently quit drinking, frame early recovery as your own individual journey and enjoy the ride. In the meantime, be sure to optimize your own lifestyle by integrating some GABA-enhancing lifestyle strategies into your daily routine:

If you have any questions about L-theanine and alcohol withdrawal, please leave them in the comment box below.

I’m not sure doses that low would be enough. Glutamate is extremely, extremely high in alcoholics. Especially first thing in the morning. Which is why ultimate alcoholics drink from the moment they wake up. Taurine has a similar effect. They should be taken in conjunction. In extreme cases, even taking GABA straight up will help since by the time you’re a raging alcoholic, your BBB for sure is shot. If still an alcoholic: 4 grams Taurine, 2 Grams l-theanine (which is a lot) in the morning or whenever the alcoholic wakes up in the morning, i.e. 2am, 3am, 4am. Whenever… Read more »

Great stuff here Ming! I agree, and would add that mega-doses are best taken after discovering one’s minimum effective dosage. I tended to have a very sensitive biochemistry, even while coming off of alcohol – but others need much higher dosages, especially with aminos like taurine and glutamine. Intelligent experimentation (and, ideally, guidance from a naturopath) is in order when mega-dosing.

Thank you Ming. 3 grams of L-thianine saved me a ride to the ER for treatment of acute alcohol withdrawal.

Don’t you get hooked on L theanine too. Hard to get off also?

Never heard of anyone getting hooked on L-theanine!

I have with someone tapering off benzodiazepines, they took l theanine and now hard to get off. You know of anything to help with benzo withdrawals? Also, why does alcohol bother benzo’s?

L-theanine indirectly supports GABA by blocking the action of glutamate, but it’s much more gentle than benzos or alcohol – which plug into GABA receptors, hence their cross-tolerance and the reason benzos can be substituted for alcohol as a taper. I used large doses of L-theanine in early recovery for extended periods of time and never had any issue stopping, but everyone is biochemically different. As for benzo withdrawal, the best resource I know for this topic is Matt Finch, who offers coaching services on Fit Recovery and specializes in drug recovery and alcohol/drug dual addictions. Hope this helps!

Would taking Gaba supplement be better than taking this?

Not in my experience Mathew, but everyone is biochemically unique – so give that a try as well!

Chris, I heard you the other day on recovery elevator. I love your system as it makes perfect sense. I also bought your book drinking sucks. I love how you teach and explain everything about biochemistry and how it relates to alcohol recovery. I was in AA eating donuts and coffee and wondering why I was feeling terrible and struggling with cravings haha.

Awesome Tyler, great to hear this! I’m sure you’ll feel much better as you repair your brain-body system, keep it going buddy.

Did you have any crazy symptoms after quitting? I’m having insomnia, headaches And some BP problems, been 3 days now

Hi Matthew, I had symptoms for months after quitting. My online course is a great resource for more info on supplementation and other strategies to get rid of post-acute withdrawal. Best of luck to you!